Before understanding pointer, it is necessary to understand variable.

In this example, there are two variables declared: num and ch. The type specifier int indicates compiler that the num will store integer type and char indicates that ch will store character type.

In this example, aNum is a global variable. It will exist for the lifetime of the program. And the variable declared in func() (int x) will remain valid only if the function func is executing. Also note that the func is called twice from main function. The variable x will be allocated for each call separately. The variables allocated in the first call will be destroyed after the call finishes and in the next call, x will again be allocated.

A pointer is a type of variable as discussed above but its value has special meaning. Its value contains address of some other variable. Whenever you use a pointer, there are two concepts involved: 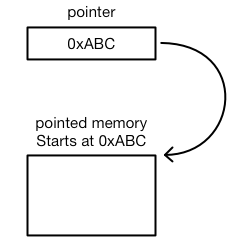 There are many ways you can assign value of a pointer

Assign with address of another variable 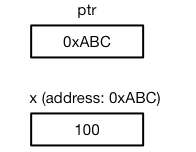 In this example the pointer ptr is pointing to the variable x i.e. the value of ptr is address of x. The address of x will vary depending on where it is allocated in the memory. The diagram uses 0xABC just for simplicity.

Assign with value of other pointer

Assign with memory allocated from heap

In this example, a new memory is allocated from heap and its address is assigned to the ptr. We will discuss more about heap memory later in the post.

Pointers can be used in any expression in two ways:

Null Pointer
If you do not assign any value to a pointer, then it points to some random memory. But there are cases when you will create a pointer variable and not assign any value (pointed memory address) or you will assign the value later. In such cases, you assign the value of the pointer to NULL. NULL is a special value that indicates the pointer is not assigned any value. In your program, you can check if a pointer is assigned to NULL or not. This is a proper way to use a pointer whose value is not set yet.

If you try to access the value at pointed memory for null pointer, then you will get access violation. 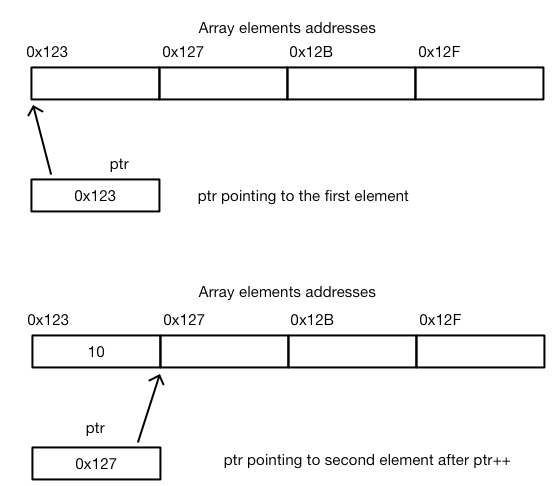 In the previous example, we assigned the pointer value to the address of an array and manipulated the elements of the array. We can also allocate some memory from heap and treat the allocated memory as array and can manipulate that as an array

In this example free(ptr) call makes memory allocator to deallocate memory pointed by ptr. If you access the same memory after freeing, it may resuly into unexpected behavior. You will probably corrupt some memory. In this example, after freeing the memory, the pointer points to invalid memory (since it has been de-allocated). This type of pointer is called dangling pointer. You can again set the pointer to to some valid memory and make it non-dangling. But never use dangling pointers

Pointer example in linked list
Pointer is heavily used in almost all data structures. Here is a simple example how it is used in linked list. First of all declare a structure to represent a node of the linked list

The first is a pointer. So it contains only a address of memory which contains data of type Node. Simply by declaring like this will allocate only the memory for storing the address of actual linked list node. At this point there is no memory allocated for linked list node. Now create the first node of the linked list.

After execution of these statements, the first pointer will point to dynamically allocated memory. The memory allocated will store a node of linked list. After allocating, we assigned the data part of the node and also set the next pointer to NULL to indicate that there is no node after this node. Let's create another node in the linked list.

After execution of these lines of code, a memory is allocated for the second node of the list. We set the data and set next pointer to NULL to indicate there is no node after this. And then set the next of first node to address of the second node.

After creating two nodes, the list nodes and pointers can be described by this diagram

The blog post covered (in short) various aspects of pointer with examples and diagrams. Feel free to comment if you have any question.


Diagrams in this post were quickly drawn using Lekh Diagram. Lekh Diagram is a sketch recognition diagramming app for Android and iOS

Drawing/Erasing using touch is a common feature in many mobile phone/tablet based apps.
Writing code for this feature is pretty simple for android. Here are steps to do that:

Making the iOS text field/view visible which is located under keyboard.

sshfs is a tool which mounts remote file system on local machine. It internally uses SSH file transfer protocol. The current implementation of sshfs has dependcny on fuse.

following packages are required to be installed:
sshfs
fuse (fuse-utils on some Linux distros)

On my open suse, fuse package was pre-installed and I needed to install sshfs.

the fuse kernel module has to be loaded before using sshfs. Here is the command to do that
modprobe fuse

I did not require anything to do anything for this on my open suse box because the fuse module was already loaded. This can be easily checked whether a particular module is already loaded or not using lsmod command.

Posted by Rajeev at 9:17 PM No comments:

Linux allows different implementation of a single command/utility co-exist. For example you can install both open JDK and sun JDK at a time on Linux and can also make one of them as default. The default selection is made using links in the file system. This works as:-


On Ubuntu, there is a graphical utility which lets you to change/configure the alternatives. But this is missing from the default install of openSUSE. But on the openSUSE this can be easily achieved by command line as -

This command will list all available options and will ask you to enter to select one of them.

Posted by Rajeev at 9:25 AM No comments:

Recently, I installed openSUSE 11.4 on my laptop. The laptop is dual boot with windows7. There was a minor issue. The NTFS drive was mounted read only by default. Editing /etc/fstab fixed the issue. Here was the original entry in the fstab:-

I changed this to as below, to make it working

There are many tools out there. gs is one of such command line tools to achieve this. Suppose there are two pdf files as file1.pdf and file2.pdf and we want to merge them into final.pdf, then the command will be -
gs -dBATCH -dNOPAUSE -q -sDEVICE=pdfwrite -sOutputFile=final.pdf file1.pdf file2.pdf

More than two pdf can also be merged by providing their names in the command line argument.
Posted by Rajeev at 8:44 AM No comments:

I am Rajeev. I write occasionally on programming.

I am developer of Lekh Diagram. Lekh Diagram is a sketch recognition diagramming app for Android and iOS.

Other articles by me:
C++ Internals
C Internals